Before we can go into detail about what a Thermoelectric Cooler is and does, we need to take a quick history lesson.

The thermoelectric phenomenon behind TEC technology was first discovered by a French physicist and meteorologist named Jean Peltier. This Peltier effect is such that whenever a direct current is passed through the circuit of different conductors, heat is either absorbed or released at the conductors’ junctions, depending on the current’s polarity. The amount of heat generated or absorbed is proportional to the current that is passed through the conductors.

Thanks to work completed by Russian academic, A.F. Iotte and his colleagues, semiconducting alloys were created, allowing us to apply the Peltier effect in practise, and begin full scale production of thermoelectric refrigerating devices for wide use in various fields of industry.

The basic thermoelectric cooler unit is a thermocouple consisting of p- and n-type semiconductor elements, or pellets. Copper commutation tabs are used to interconnect pellets that are traditionally made of a Bismuth Telluride-based alloy.

So, your typical thermoelectric cooler consists of thermocouples connected electrically in series and sandwiched between two Aluminium Oxide ceramic plates. The number of thermocouples will vary greatly, ranging from several elements to hundreds of units. This allows Kryotherm to construct a thermoelectric cooler with a desired cooling capacity ranging from fractions of a Watt, through to hundreds of Watts. 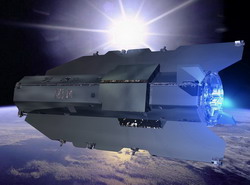 Kryotherm’s TECs are even used in the creation of satellites, to help protect delicate machinery from the cold of space.